The World Cup finalists battle on Sunday in South Africa to determine the 2010 world soccer champion. The two teams: Spain, reigning European champions; Netherlands, a powerhouse of young soccer talent – who will win?

But, more importantly, which team has the better website? The world awaits Workbox’s decision. 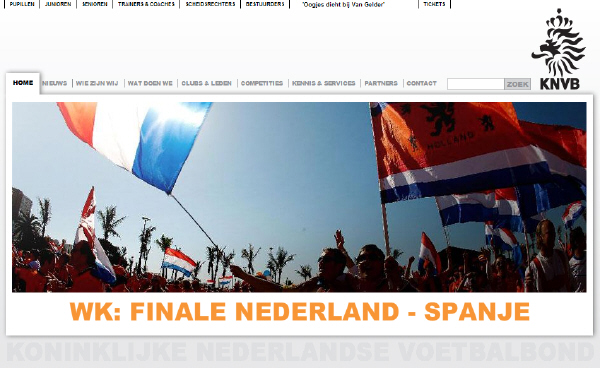 Gleb: Eric, the first thing I noticed about the Spanish site is it’s written in JSP. That’s a pretty old technology, java server pages. Doesn’t let you do much.

Eric: Yeah, the Netherlands site is in PHP, and I think it’s using Drupal. A lot more contemporary and cost-effective.

Gleb: Another good thing about the NL site is that it’s got user-friendly and SEO-friendly URLs, while the Spanish site has URLs that consist of numbers and ids.

Eric: I see that both of the sites are using Google Analytics. But the Spanish site’s using the old Urchin code.

Gleb: I just clicked on the Netherlands main homepage image and ended up at http://www.onsoranje.nl. This looks like a fans’ site – people register and login here. This is really the main focus of the Netherlands’ site – getting visitors to the fan site so they can see video, register for updates, join community stuff. I also like how Netherlands uses the orange color. Their team’s brand is centered around orange.

Eric: I can see Netherlands built some iPhone apps for the fans too! But if we go back to http://www.knvb.nl…. I don’t like that frame that is fixed on the screen. Makes you have to scroll within the frame to read the content.

Gleb: Yeah, on the Spanish site however, the HTML doesn’t look clean. The indents are off (see the news on the homepage) and things do not always line up (sponsors at the bottom). The Spanish site has social network links, too, but they don’t seem as aggressive about it. What do you think of the logos?

Eric: I think the Spanish logo is better… Although I can’t say I totally love it. The Netherlands logo’s got a lion turned left… This is not a very good practice, but it’s on the right, so it’s O.K. What would you say about content?

Gleb: My knowledge of Dutch and Spanish is very limited. But it’s obvious that both sites contain information about the same things: national teams, different kinds of soccer (indoors, women, junior), news, contact information. But Netherlands’ got that fans website with lot of video and social stuff. So I’m on their side.

Eric: It’s too bad neither site seems to have an English version – it helps make a website more international, and I speak only a tiny bit of Spanish and no Dutch. If it exists, then it’s really hidden somewhere. But maybe that doesn’t really matter since the whole sport is pretty country-oriented.

Gleb: Oh, I just noticed something else. Once you click on a sponsor logo on the Spanish site, it opens in the same window and you leave the site. Not good. So who wins?

Eric: Although my heart is with Spain, I think the Netherlands. Their online presentation appears to be pretty strong and solid, and they are creating a community around the site. Both the “regular/official” sites are pretty similar, but NL’s official fan site gives them a big edge.

Gleb: Yes, and their technology looks more modern too. I guess we made our prediction – Netherlands. We’ll just see whether it matches what Paul The Octopus says (Read more here: http://bit.ly/9gJgR4)

About Gleb and Eric:

Gleb Aksyutchenko, Workbox’s team leader, played semi-pro soccer as a center midfielder in Russia, and won the regional open championship in 2003. He kindly calls the game “soccer” for Eric’s benefit.

Eric Weidner has kicked a soccer ball 9 times in his entire life.